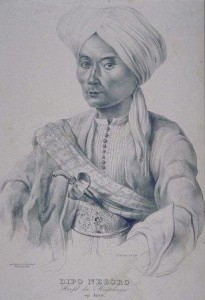 Before I got in too far to his works. Frankly, I am disturbed by the spelling of Diponegoro become Dipanegara. Why Bojonegoro is not altered and incarnated to be Bajanegara? An so on. For me, I use its original spelling (: Java) which is Diponegoro, in addition to confirm the last literature exists. Started from the original dialect, its power of prestige can be viewed more strongly, when interpreting a sentence, moreover in composing the work of literature.

In Java, the name of Prince that its famous was beyond the king of small kingdoms is Pangeran Diponegoro. Whereas, in his mind, he did not so proud to that title. He was more comfortable as folk, more tasty to chew salty salt of ordinary life. There were no other reflections, beside the consciousness of rebels that thing won’t be rose, carrying the burden of his motherland Dwipa at the time.

When I read romance of history essay by J.H. Tarumetor TS. entitle “Aku Pangeran Dipanegara (I’m Prince Dipanegara)” published by Gunung Agung Djakarta, 1966. I felt how fierce the fighting for independence, which is reverberated brightly to bring to the reality the ideality of liberty, from the confines of the colonial, which pitted arbitrary to among noble bloods, the descent of motherland. It was based on pure intentions, the resistance kept rise up, guerrilla and kidnapped the enemies with a flaming fire, sometime they faced canon with spears, daggers and sharp bamboos.

Every their passing of ditches, steep cliffs, foothills, bushes, wilderness, slippery of rocks, heavy stream of rivers, fishy blood meadow, are references to improve the quality of future rebellion. Hence the memory must always be maintained, washed by the running of consciousness, such as the softness of water capable to infiltrate into the fibers of the stone, chinking and makes hole to stones on the cave of contemplation. Undoubtedly, the body of nationality screams out loudly, when the feet of grasses are trampled by iron shoes, the horses of passion that were possessed similar the Dutch E. India Company. If reviewed to the present time, the fate of our motherland is stricken by virus of corruption.

Below, I am going to perform that Pangeran Diponegoro as a poet of Indonesia, before the student of Tegalsari, R. Ng. Ronggowarsito. I was intended to uncover the spirit of homeland onto the sacrificing of the youth, for the souls to follow his persistence. Educates the mental in order to be not so rusty by the age, not decay in the froth of disappointment. If shallowness of gurit (Javanese poems) is merely memories, it still has the spirit of its writers. Moreover, tetembangan (Javanese songs) processed from mature heroic souls; not bowed before property (materialism), rank or position (social grades) or even to blonde girls.

So check it out …

When I read its origin language, the body of witness was shivering; the body hair stood up such as needle on fingers of virgin girls, injected all the bodies buried the past. The history is generated by the seriousness of working, no hidden preamble, all to be spatial-time to the past events. The holy struggle confirms the steps became guide in the future. The language is not just a teller, in which there is power, the remembered soul pulls quota out to be competed in the space-time of the readers. Hence, don’t you ever underestimate the attitude of reading, in order not to be crashed by waves of forgetfulness before reaching the destination.

Below is the meaning copy of his work above in Bahasa Indonesia:

I devoted feeling of pure heart to
versify poems and console grief-sorrow
prepare writings in the city of Manado
when my eyes was seeing nothing
unless to the God Almighty.

A great deal I felt in the hearts
doing the wrong direction
until I had the heart of thought:
what has become of this humble servant,
as if those behaviors
revealed no mercy,
by the Lord Almighty.

Poignant, melancholy, humiliation and disaster is perceived
but I begged it indeed,
for all mistakes in the past and in the future
would be got the God’s forgiveness,
and also to the families and relatives
whom with all seriously and really sincere
followed the doctrines of the Prophet who carriers the holy word of God.

So, it was Tembang Midjil by Pangeran Diponegoro in the city of Manado, as Prolegomena of “Babad Diponegoro,” which was finished in Makassar city. The Babad contains the ancestral history, the records of the fallen of Majapahit kingdom until his end of life. The struggle of steel hands, the feet of elephants, the fishy of fresh blood, dusty sweat, treasure-life was lost around for five years continuously against the occupation, from July 20, 1825 until March 28, 1830. And, a quarter of a century, he curled up in the castle of prisoner, languishing and isolated in a foreign land of exile. Where the range of time saves the events, tempo of a memory incarnates harmony of songs, the glory of heart trembles in the struggle.

It is undoubtedly, the bodies are buried by the dirt of homeland as the good fortune of unity, like the essence of earth spike; the planted mountains, in order to do not diffuse the meaning of Indonesia. Where every rebellion is raised, the morning dew sends the news about the events of poetic meaning, born from the struggle of the deepest spirits of the sun. And the remainder is stored in the infiltration of leaves of history. Certainly radiant of the heart, on the reflection of willing to strive for the homeland with the whole life, sincerely and faithfully face to His Blessing.

NB; As I know, every language’s rule doesn’t allow any kind of changes to the name of place, etc. Especially, the changes to the name of man (person). So, why Bahasa Indonesia allowed the change of Diponegoro to be Dipanegara, at that time? It made me has assumption that Bahasa Indonesia was not solid (mature), at that time, in the case to aim to its final goal, which is to be international language like the other language that done earlier, such as English, Arabic, etc.

So, according to my knowledge, I agreed with this writer. He rebelled to the changes made by Bahasa Indonesia especially to name of man or places. Wallahualam Bisshawab.