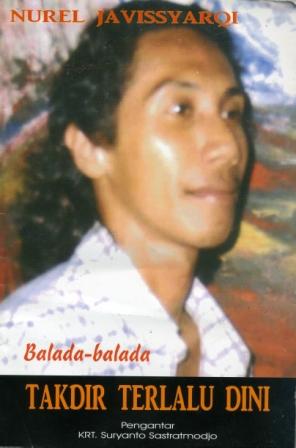 The craziness leads to one hole,
doesn’t seen but felt,
digs the own grave in the entrenchment of ground,
uncovers the great grand mother; all kind of bones are breaking uncommonly,
spread around, be collapsed suppressed by the war. Where doesn’t change,
become the digger for the all brothers. (The Crazy Man Accost You: XXXVII).

There is a slight intonation from the pulling of the poetry above, where the poet Nurel Javissyarqi gives a musing. But however that is, please allow me to collect the effort of those musing, as one of unique metaphors; that, there is the time for human kind discusses about the happening of craziness of life. Or some kind of vague atmosphere of a monument from the fighting back of history, that a reality is not only had to pointed at, judged. But, also must cross over it as el ultima factum; the time (second) where must admitted that seem highest fact is a striping of fate’s line.

We can be crazy suddenly, temporarily or all the time; how far the fact is from el- maut (death). The poet Nurel Javissyarqi, that before using name Nurla Gautama (the name was gave by the short stories writer, Joni Ariadinata) in this anthology. Well, how eroded the live is without the burial digger, and without the care about the bones that almost become dust. As if we could at once “become crazy” temporarily, in order to be able to “dig” the memories of universe. Certainly the plays of universe could be decided according to the line of flexible destiny, empty, relatively. The matter is, when the human become the founder of the actual ideas (the past assumed as the best). Therefore, I and me my self, as if the part of the fate’s gradation that up to the mind of my own heart; where the feet will go?

Too early destiny, perhaps as the nervous implementation of the poet whose tried to scrape for the presence of wandering of the great grand wide. But he doesn’t pick up the stars from the strange sky, but the firmament of ancestors, the nearest space of culture. Sometimes, he must write how much the grade of “him self” the certainty of poor fate, while the behavior of luck is lying across of the mysteriousness of God.

The end greeting, my well manner best friend, please delve the emptiness of this live, in order that the push- pull and the tensions between the crazy man and the submission man in the impermanence universe can find the meaning; the fact is, any one whoever that is must sail the mind’s dugout of heart’s light.